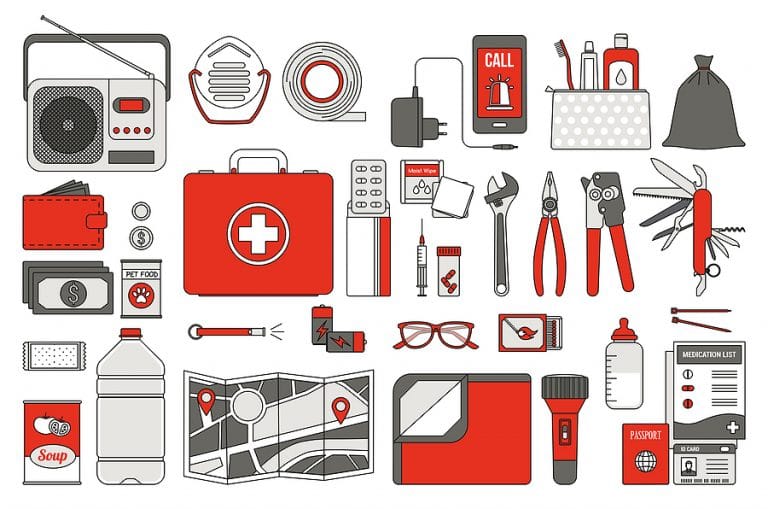 If you’re looking to complete your emergency kits and replenish your pantry, now’s the right time to do some shopping. There are a number of early Black Friday deals where you can purchase survival tools, emergency food, and other emergency gear at discounted prices. We’ve listed down 10 of the must-have items being offered for cheap during this year’s Black Friday sale. 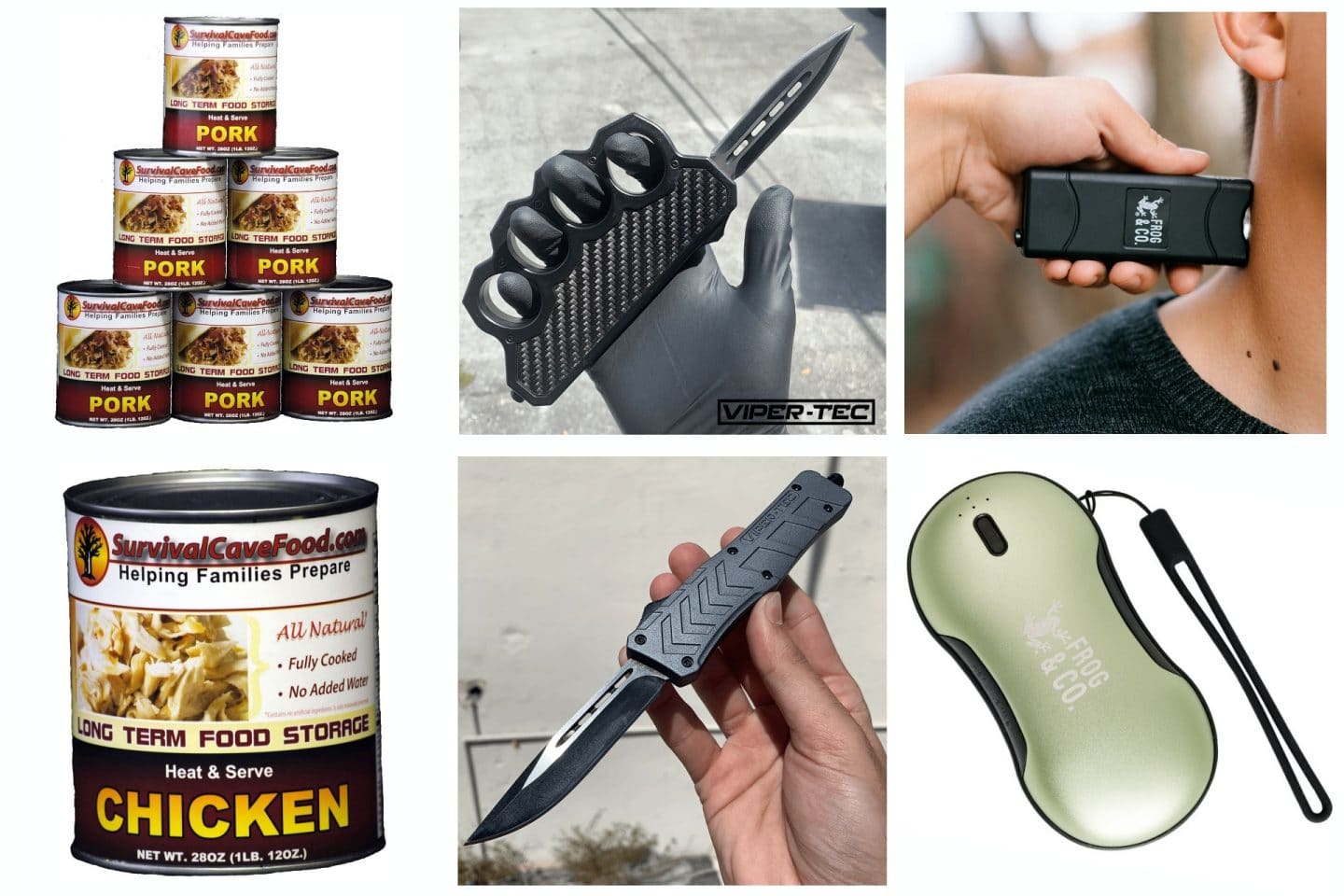 Emergency or not, you need to eat. How else are you going to survive? But when an emergency does happen and it becomes impossible to eat out or buy food, you’ll be glad to have a pantry filled with emergency food. You have one, right?

Take advantage of the many early Black Friday deals to fill up your prepper pantry. For one, Survival Cave Food is having an early sale with its canned products available at discounted prices.

Their ready-to-eat Canned Chicken is available in a case of 12 cans, weighing 28 ounces each. The all-natural canned chicken is sourced from humanely processed meat that has been inspected ad approved by the USDA. The full case is normally worth $399 but is currently available for only $299.

Survival Food Cave has plenty of meat options in its arsenal. Aside from chicken, they also have beef, pork, and turkey. You can purchase boxes of the same kind or choose cases with assorted contents to give you more options.

These canned meats are available in full cases containing 12 28-ounce cans or half cases with 6 cans. They also offer 14.5-ounce cans in full and half cases. For their early  Black Friday sale, Survival cave Food is offering their 1/2 case of canned pork for $149.50 from its original price of $174.50.

Emergencies are not always about natural disasters, accidents, or medical issues. Human and animal attacks are two other kinds of emergencies that you should be preparing for. Aside from learning martial arts, you need to equip yourself with the right self-defense tools.

The VF-1 Double Action Out The Front Knife from Viper Tec is a great addition to your emergency kits, particularly your bug out bag and everyday carry (EDC) kit. Whenever you’re in trouble, you can easily deploy the 440c stainless steel blade to scare or fight off your attacker. All it takes is to slide the button forward to release the 3.25-inch blade. Press it backward and the partly serrated blade will retract.

The zinc alloy handle features a non-slip design that lessens the risk of you losing your grip. Thanks to its ambidextrous design, anyone old enough can use the Viper Tec VF-1. A built-in pommel is located at the bottom of the handle. This will come in handy when you have to break glass windows. There’s also a reversible metal pocket clip that lets you carry the knife in the button front or button back positions. Speaking of carrying, check your local laws to see if the VF-1 is legal to carry in your state or city.

The knuckle knife or trench knife originated in World War I. At the time, close combat fights often happened along the trenches, hence the name. The knuckle knife was meant to help the soldiers fight off their enemies. The knuckles, in particular, protected the fingers and made punches hurt more during such fights. The knuckle knives of today serve the same purpose.

The Viper Tec Knuckle OTF Knife is a badass multi-tool for self-defense and emergency preparedness. It’s a fully functional, double-action out of the front (OTF) knife, first and foremost. The double edge spear point blade measures 3.5 inches. It’s made of durable 440C stainless steel so it should get the job done when the job involves stabbing and slicing.

The knuckle handle is made of zinc alloy so it shouldn’t break easily when you have to hit someone with it. You’ll also find a glass breaker pommel and a pocket clip on the handle. You can safely hide your knuckle knife in the nylon sheath included with the purchase.

Since we’re on the topic of self-defense, you should consider equipping yourself with some non-lethal weapons such as pepper spray and stun guns. There’ll always be the possibility of danger lurking in the dark or waiting behind the corner. Whenever you’re out, you should always have such self-defense weapons ready in case someone tries to jump you.

The LifeShield Self Defense Kit includes a stun gun with 2.2 million volts of stopping power. The 3.2-ounce survival tool measures just 4.15 inches long and 2.15 inches wide so it should fit in any bag or purse. It also comes with a lanyard rope, which you can wrap around your wrist so you don’t drop your stun gun during a struggle.

The pepper spray, meanwhile, can temporarily halt an attack from 10 feet away. It is capable of 25 bursts with 98% reliability so you should definitely keep one in your pocket or EDC kit.

The kit also includes a personal alarm. While this is not a weapon, it can be effective in thwarting an attack. The personal alarm blurts out a 120 decibel sound that can be heard up to 600 feet away. It can scare an attacker and alert other people within range. It’s a good idea to keep it on your keychain or clip it where you can easily access it.

The LifeShield Self Defense Kit normally sells for $69.97 on Survival Frog but thanks to their early Black Friday deals, you can get these three emergency tools for only $49.97.

Always carry a hand warmer, especially during winter. If it gets really cold, your jacket and mittens might not be enough. This is particularly true if you’re stranded in snow in the middle of nowhere.

The QuickHeat PRO Rechargeable Hand Warmer does more than keep your hands warm. It doubles as a portable power bank so you can charge your devices and call for help. If that’s not enough, Survival Frog is offering the QuickHeat PRO in a bundle with its little brother, the “original” QuickHeat Electric Hand Warmer.

The QuickHeat PRO provides 120 to 130 degrees Fahrenheit of heat that can last from 6 to 14 hours depending on the setting. It is equipped with a 9000 mAh that takes 7 to 8 hours to be fully charged. It can be charged using the USB cable that comes with the purchase. The pure imported aluminum hand warmer also charges your phone and other small devices via the USB cable.

During the Black Friday sale, you can get both hand warmers for only $49.97. That’s actually the price of the QuickHEat PRO. That means the original QuickHeat, which retails for $35, is yours for free when you get the new version. 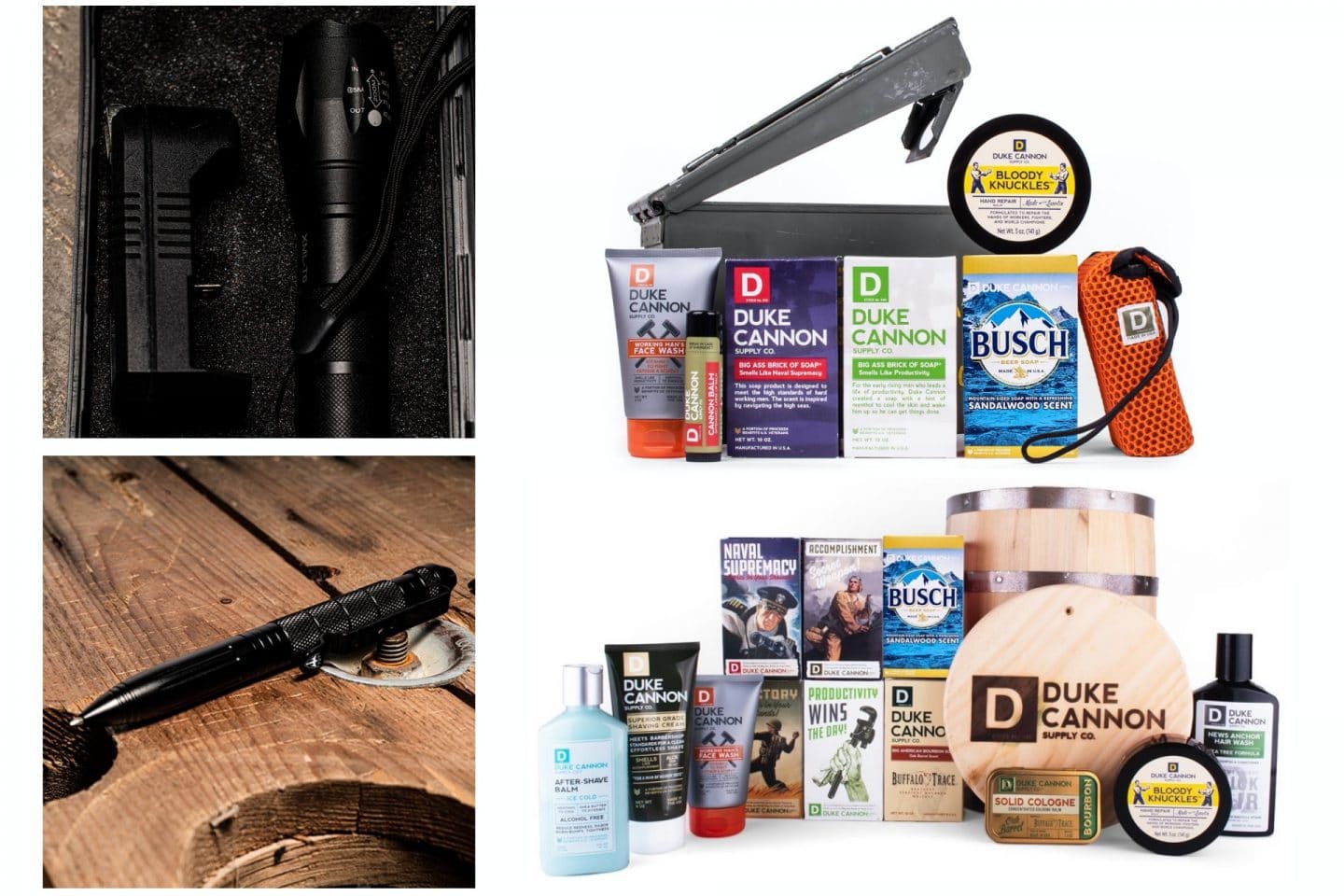 Flashlights are vital in many emergency situations. You’ll need one during power interruptions, when you’re walking in the dark, when you’re car breaks down at night, or if you’re looking for the remote under the couch.

The Alpha Defense Tactical Flash Light is designed to withstand the toughest of situations. The water-resistant tactical tool is made of durable aluminum alloy. It’s also anti-abrasive and skid-proof.

The compact flashlight measures 5.5 x 1.5 inches and features 5 different light modes, including an emergency light. You can switch from one setting to the next just by pressing the button.

The Alpha Defense Gear Tactical Flash Light Pack includes the flashlight, 2 Alpha Defense Face Shields of your choice, a Decal, and an Alpha Decal. This impressive loot would normally cost a little over $75 but is yours for only $44.99 if you take advantage of their early Black Friday deals.

A tactical pen is another non-lethal self-defense tool that you can carry anywhere you go. This EDC must-have is a writing tool that can also be used for self-defense like a kubaton.

The Alpha Tactical Pen is made of aircraft-grade aluminum alloy and has a carbide tip that can be used to break glass in an emergency. The lightweight tactical tool’s handle is adorned with a diamond thread to ensure a secure and comfortable grip. To be an effective self-defense tool, however, you should learn how to use it the right way.

When it comes to writing, the Alpha Tactical Pen works as any normal pen does. But aside from its sturdy body, this pen can still write well in any weather condition. You can also use a standard refill if it runs out of ink. That means your Alpha Tactical Pen will last quite a long time.

For this year’s Black Friday sale, Alpha Defense is currently offering its tactical pen in a pack including 3 of their popular face shields and an Alpha decal. All these total about $80 but Alpha Defense Gear is practically giving them away at a discounted price of only $19.99.

When you prepare a bug out bag, you should include toiletries and other personal items. Cleaning yourself up will do wonders for your physical and mental health during a calamity. Soaps and alcohol, for example, are important in disinfecting your hands before eating anything. The feeling of being clean and fresh will also help you deal with the situation better.

Fortunately, Duke Cannon is also having an early Black Friday sale. They are offering a number of their popular products in discounted gift sets. Their Working Man’s Supply Box, for example, includes the following:

In the aftermath of a disaster or other tumultuous situation, you likely won’t have the luxury of long baths or showers. For the rare times that you can take a bath, you need a soap that will leave you thoroughly clean, feeling fresh, and smelling nice for a long time.

These Big Ass Brick of Soaps by Duke Cannon got the thumbs up from military personnel asked to sample the products. That means you’re using high-quality soaps that are meant for the hardworking men and women out there.

Individually, the contents of Duke Cannon’s Working Man’s Supply Box add up to an $87 value. Thanks to their Black Friday deals, it’s available for only $70.

A true prepper knows the importance of proper hygiene in surviving in an apocalyptic world. With all the running away from zombie hordes and evil, cannibalistic humans, you’re bound to get dirty. That’s why preppers stockpile toiletries, too.

When it comes to bath soaps, Duke Cannon is one name you should remember. Their Big Ass Brick of Soap, in particular, is a favorite among military people and many others who get down and dirty to earn their keep. And since whiskey bourbon is one of the ingredients used in many of their soaps, they had this grand idea to dump a variety of their best-selling products in a barrel. Each mini barrel contains the following:

All these Duke Cannon products have a retail value of $159 but the Grooming Barrel gift set is available for only $125. Duke Cannon had only 100 of these reusable barrels handcrafted by expert woodworkers so the supplies are limited. Oh and these barrels can be used to make your own whiskey.

We’re still a few weeks away from Black Friday but, thankfully, a number of retailers are already slashing their prices. It’s the perfect time to take advantage of the many early Black Friday deals to complete your Christmas shopping. Aside from the emergency gear and supply listed here, you can discover more items over at Gentleman Pirate Club. Check us out regularly to know more about what you should include in your emergency kits. 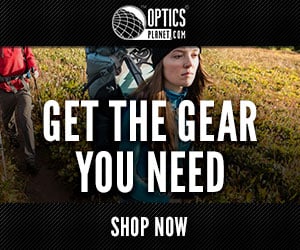 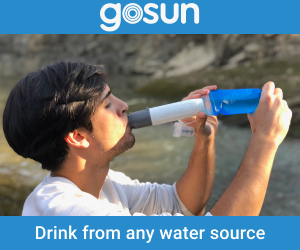 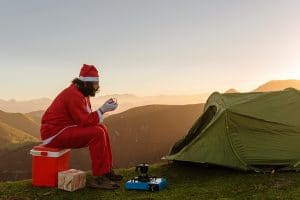 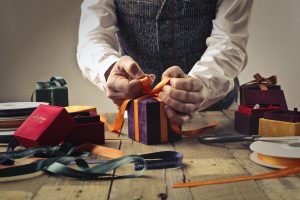 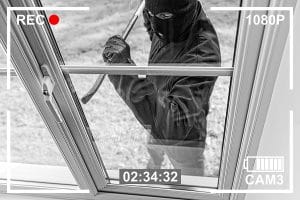 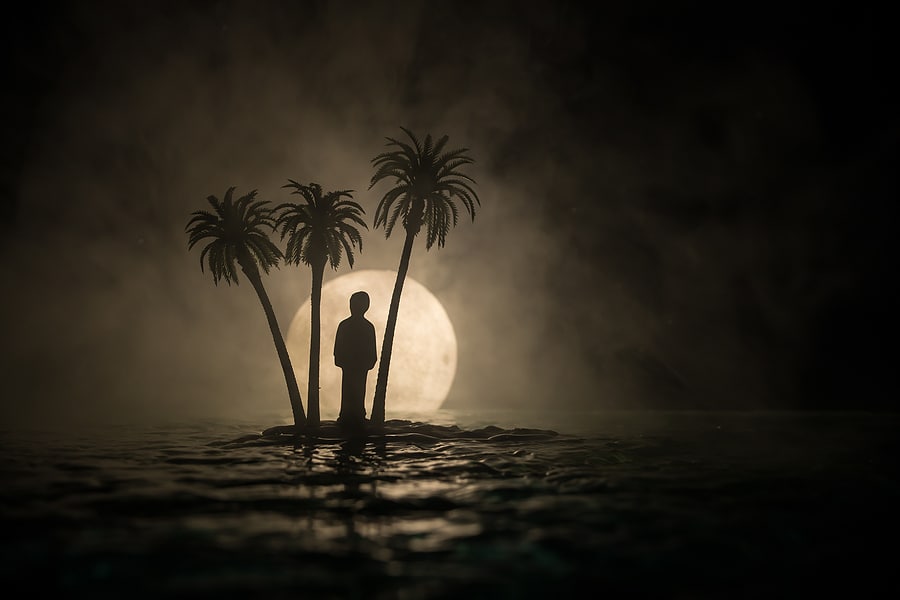 What Would I Do To Survive On A Deserted Island 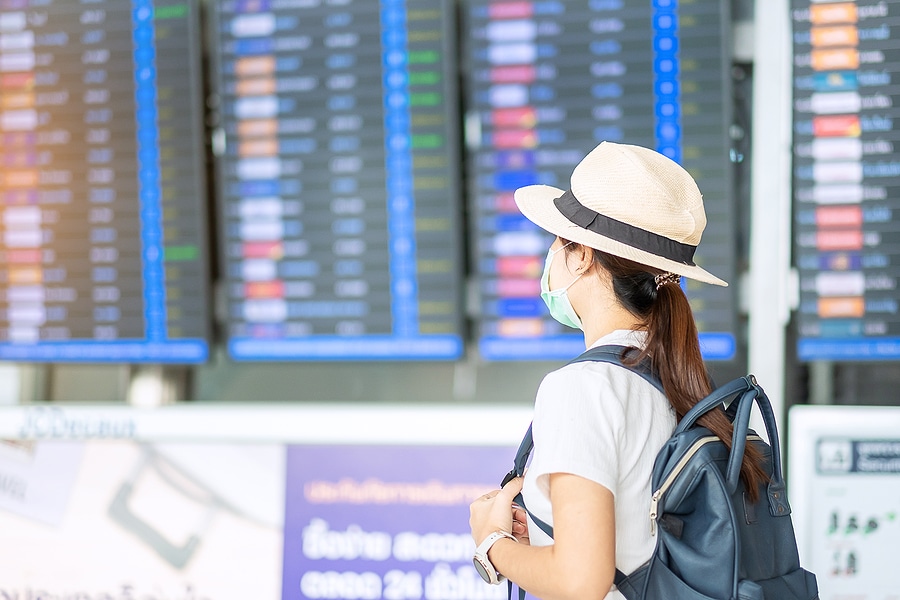 If you’re looking for some camping quiz question

My wish is to stay always like this, living quietl

If you’re looking for some camping quiz question